Day Four - Train & Luxor
.
We woke up on the the train after a poor night of sleep. As soon as the sun came up, we looked outside the window of our cabin and found that the train was rumbling through some areas of Egypt that never see tourists. I grabbed the camera and took the following pictures for the next 3 hours until the train finally made it to Luxor. 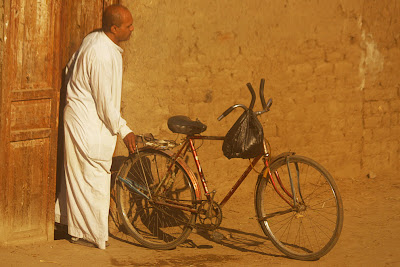 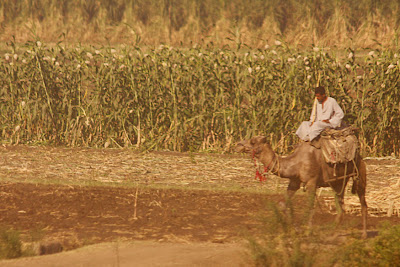 Camels are still used for transportation and as work animals. 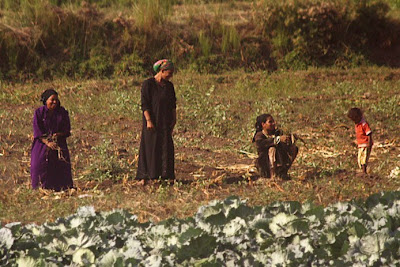 We passed many fields while on the train. It was common to see families working together. 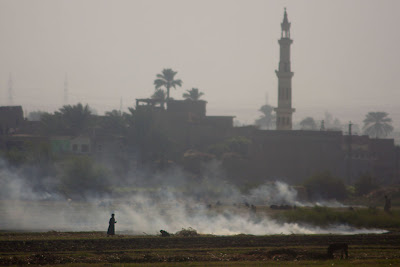 This shot is of a field with some trash being burned. The mosque in the background is a very common site. 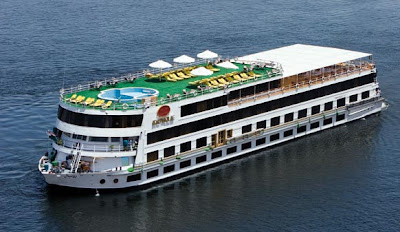 When we finally made it to Luxor, we got on our four day Nile cruise, the Jaz Royale. This is very different from an ocean cruise. The boat only had 47 guests. It would make multiple stops each day at various sites along the Nile. At night, it would dock at a town so we could walk around at night. It was an amazing experience to float along the Nile. 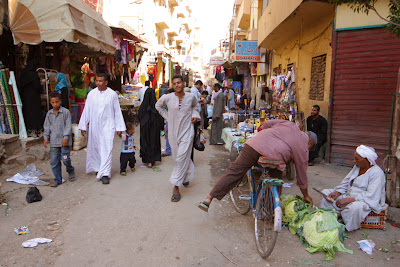 After we checked in on the boat, we had a few hours to kill before our first tour. We decided to check out the local market. It was very different from Cairo. The street was dirt and was filled with shops for clothes, food, and other local goods. Check out the size of the lettuce in the photo above! 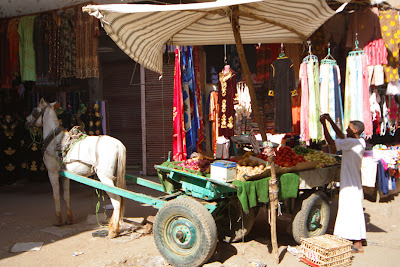 I can't get over how awesome it is that Egypt still uses donkey carts! 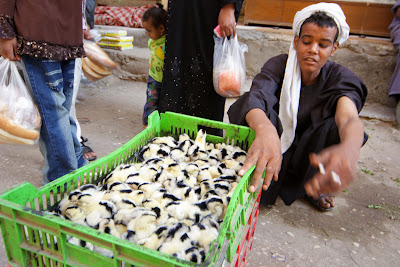 This kid had a crate packed full of baby chicks he was selling. 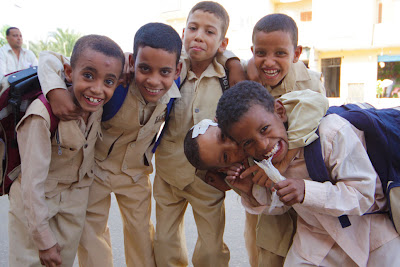 Once again, the big digital camera caught a lot of attention from kids as they were coming home from school. These boys were so excited to get their picture taken. 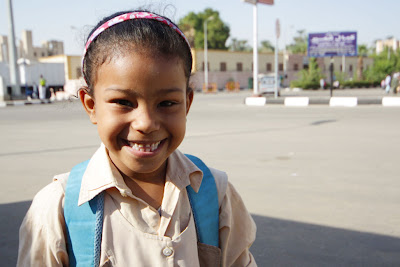 This darling girl ran all the way across the street to get her picture taken. 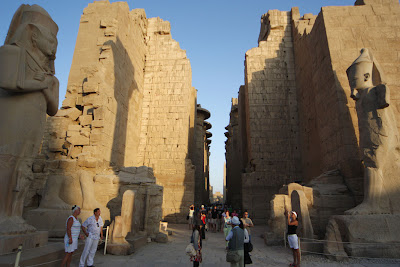 Our first tour was the Karnak Temple. It is the largest temple in Egypt and was built over many years. Almost every pharaoh added to the temple, but most of the construction was done under Ramses II. That is why these giant Ramses statues guard the entrance. 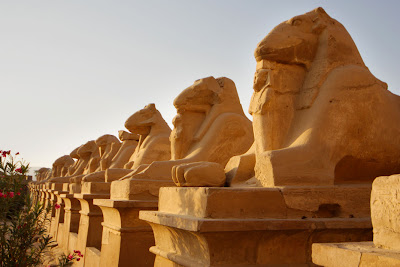 These ram statues used to line both sides of the 1.5 mile long road that separated the Karnak Temple and the Luxor Temple. 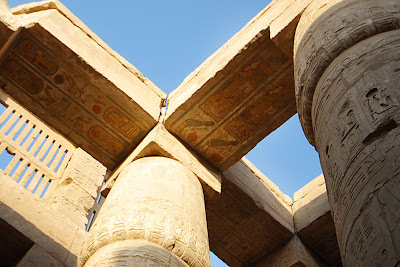 The Karnak Temple is filled with giant columns that are covered with hieroglyphs. The color that is visible on the stones on top of the columns is original and hasn't been restored. The Egyptians ground up precious stones into a paste and then painted it onto the hieroglyphs. They used precious stones because the color would not fade over time like natural pigments would have. 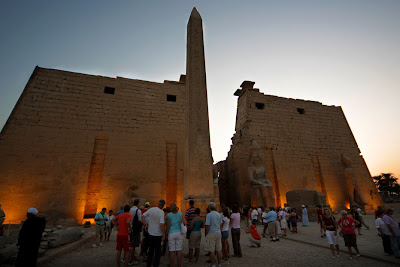 Next, we went to the Luxor Temple. This temple was also built mostly by Ramses II, but many other Pharaohs contributed. The photo above is the main entrance. Originally, there were two obelisks in front of the temple. However, the one on the right was removed in 1829 and given to France as a gift. If you have been to the Place de la Concorde in Paris, you have seen the other obelisk that used to stand in front of the Luxor Temple. 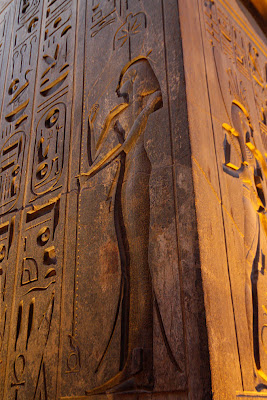 The hieroglyphs inside in the temple are in very good condition and have incredible detail. 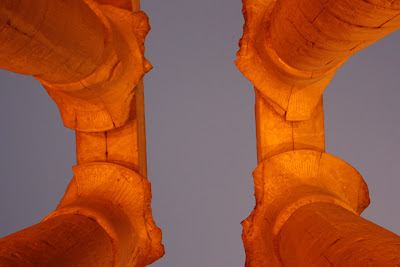 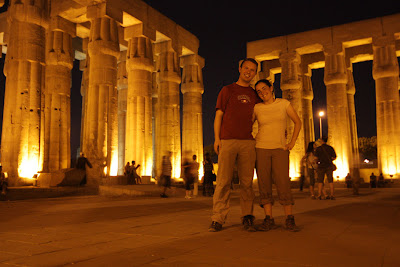 It was neat to be at the temple at dusk. As night fell, the lights made the temple look spectacular. 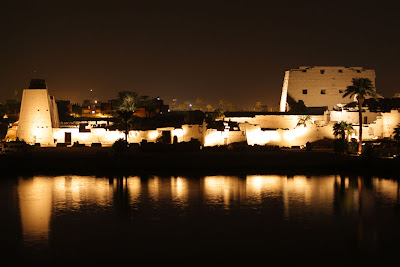 After the Luxor Temple, we went back to the Karnak Temple for the sound and light show. Similar to the Giza light show the story was pretty cheesy and over dramatic. However, the light show was great!

Day Three - Cairo
.
Today we hired our driver again and he took us to some of the sites in Cairo that are relatively new . . . less than two thousands year old. 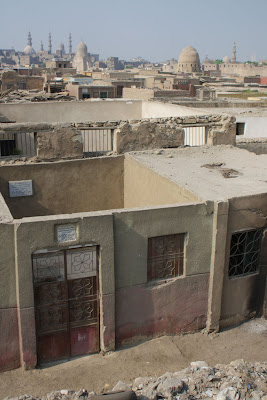 This is the City of the Dead. It is a four mile long area of Cairo that is formally known as the Northern Cemetery. Traditionally, Egyptians built small house-like mausoleums for their loved ones where they could stay during the 40 day mourning process. Also, when they came to visit the dead, it gave them a place to hang out. The City of the Dead is filled with these small houses. Today, the area is filled with thousands of homeless people who have moved in and live with the dead. They have even set up markets and coffee shops amongst the tombs. 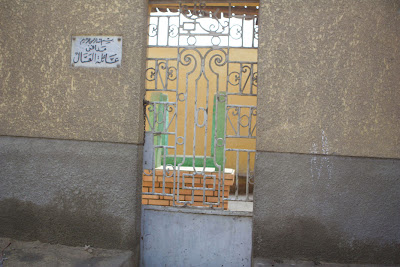 This is a view inside one of the mausoleums. If you look behind the bars, you can see the tomb. 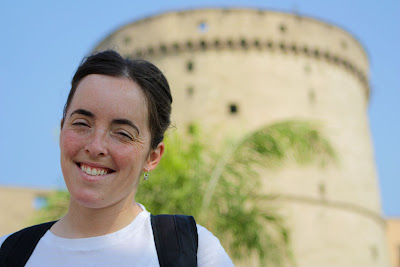 Next, we went to the Citadel. The history of this area goes back to the year 810 A.D. and has had many uses. The position of the Citadel, on a hill overlooking the city, made it a great location for military defense and was even used to defend against the Crusaders. 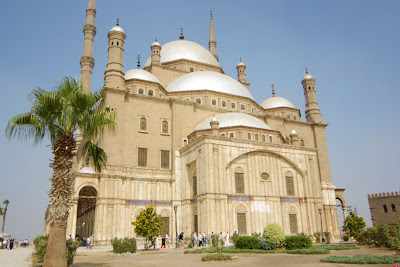 Many different mosques have stood within the walls of the Citadel. Today, the Mohammad Ali’s Mosque dominates the site and is quite stunning. 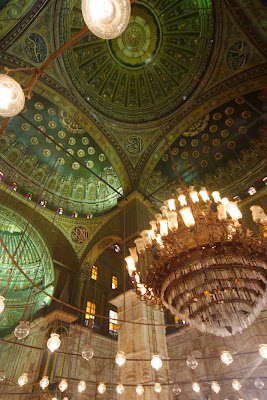 The inside of the mosque is beautiful and unique. 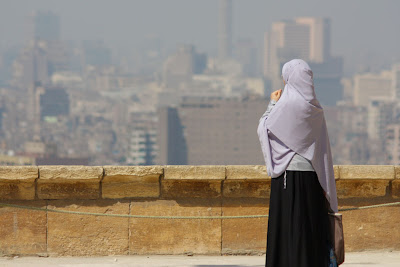 The view from the Citadel is supposed to include the pyramids, but the pollution in Cairo is so horrible that there is no chance of seeing that far. You can smell and taste the pollution all day long. 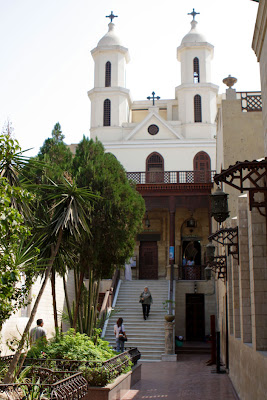 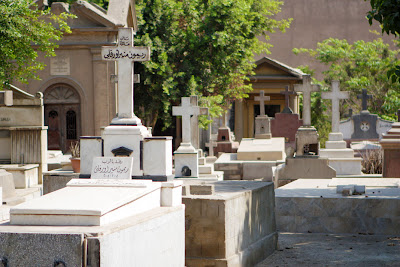 Near the Hanging Church is a Christian cemetery. It really should be in a scary movie. Seriously, I'm sure at night this place has dead people walking around everywhere! 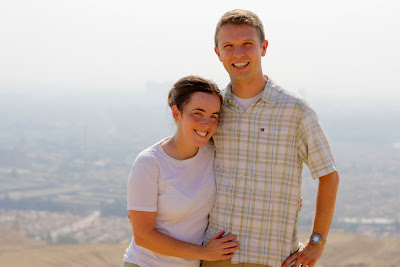 Another view of the city on a clear day. 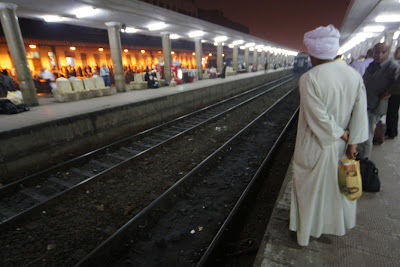 That night, we got on the sleeping train that took us on a 12 hour trip to Luxor. 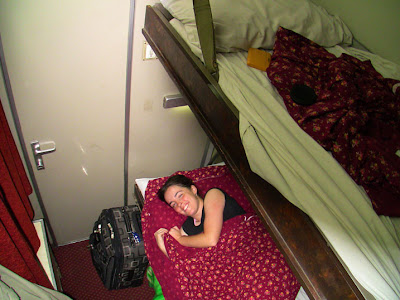 This is our little room on the sleeping train. If you've ever ridden on a train in Europe, this train isn't anything like that! This thing rocked and rumbled down the track. Occasionally it would just slam on the brakes. I was sure we were going to hit another train. Needless to say, we didn't get much sleep that night.

Posted by Jared and Reini at 8:47 PM 3 comments