Last week, I went on a work trip to Taiwan. The trip was short notice and was scheduled to be very busy, so Reini wasn't able to come, which was a big bummer because I missed her a lot and we would have had a great time seeing the sights together. The trip ended up being incredibly busy. But, I took every opportunity I had to go see some of the sights. 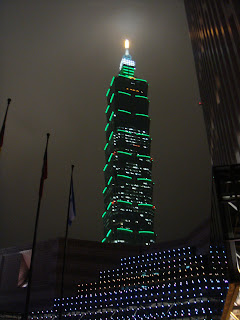 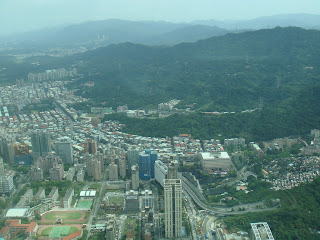 The view from the top was amazing and reveals how green Taipei really is (something I didn't know). 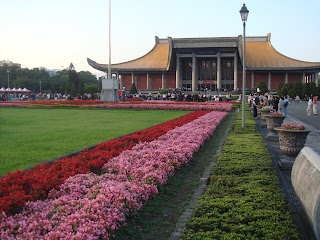 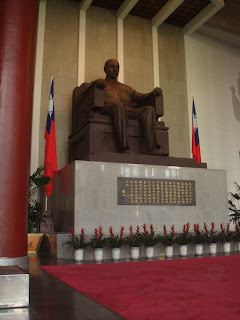 I toured the National Dr. Sun Yat-sen Memorial Hall. This is the guy that helped lay the foundation for the Taiwan government that helped set it apart from the China government. (My history knowledge is lacking; that is the info I gathered from the high school girl that gave me a free tour as a school project to practice her English.) 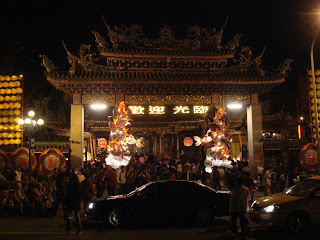 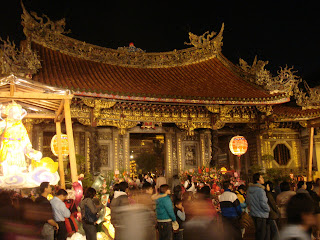 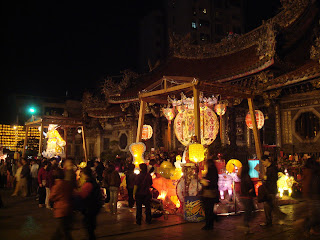 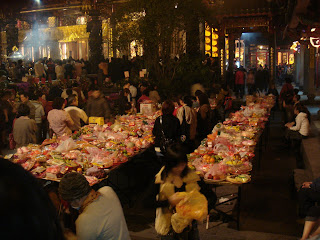 I walked around the Lungshan Temple. It was jam packed with locals. I was one of only three white people at the temple. I'm not sure if I was supposed to be taking pictures, since I only saw one other person taking pictures, but no one ever stopped me. It was really neat to see the locals worshipping. They would light incense and worship at seven different stations. They would put one incense stick into a big metal cauldron thing that was in front of each station. Also, there were several tables packed full of fruit, pastries, and desserts that were being offered as sacrifices (you can see this in the last photo above). In the center of the temple, people were singing. It was a really neat experience and may have been my favorite part of the trip. 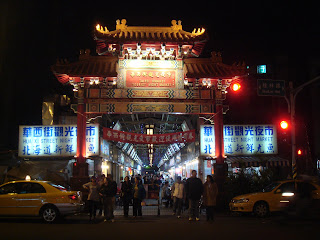 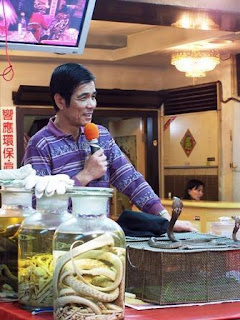 I went to a few different night markets. They had a variety of little shops and food. I bought a big plate of food for about $2.00 that was the best Chinese food I've ever had. Also, one of these markets had a guy that had snakes hung from ropes that he would cut open and drain their fluids into a flask. I can only guess that people drink this stuff, but I never saw anyone do it. While he was talking to the crowd, he had two Cobra snakes, at attention, just sitting out on top of the cage. They would occasionally snap at him. It was NUTS! (I didn't take the above picture of the snake guy because the only sign in English on the entire street said, "No photos" right next to him. And seriously, I wasn't about to mess with the dude that has two cobras on display. So, I pulled this photo off the Internet.) 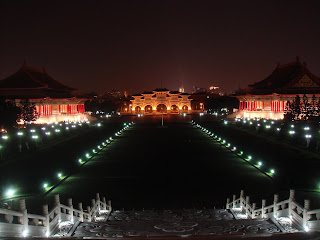 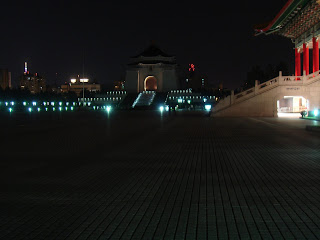 I also went to the Chiang Kai-shek Memorial Hall. It was an impressive set of buildings! 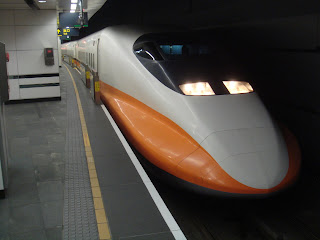 For work, we traveled to the city Chiayi on this crazy fast bullet train. It got up to 186 MPH! 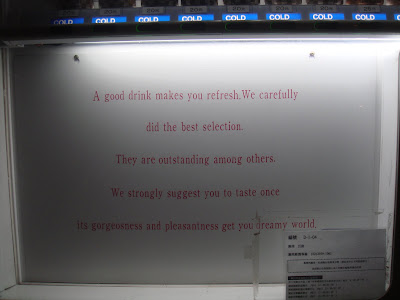 One last thing, who doesn't like some funny Chinese-to-English translations? I took the above photo of a sign on a vending machine. After I read it, I had no choice but to buy a drink!

.
It was a pretty good trip, but it was missing one very important thing: Reini. I really wish she could have come along...

My heart is full. Today we had a special stake conference with Elder Oaks as our guest. What an amazing man! I have never known too much about Elder Oaks, but I left the meeting today with a strong testimony of him. His spirit was sweet, his words gentle, and his message was filled with hope. What a great way to start another week!

Posted by Jared and Reini at 5:09 PM 1 comments